I have several T-60s. This is the one that is in the finest condition. The exact date of manufacture is difficult to ascertain, but it may be from 1981. Whatever the exact date, this instrument is almost 30 years old, and when I received it I was very impressed that the eBay seller had not been exaggerating when he called it a "closet classic" and claimed it had scarcely been played.

The Peavey T-60 was an attempt to capture some of the best design elements of the Stratocaster and the Les Paul and blend them together, along with a few special touches dreamed up by Chip Todd and Hartley Peavey. The weight is in between the two, and it has a flatter, more comfortable body like a Gibson SG. The price was considerably lower as well.

Take a look at the superb solid steel bridge with string-through design. Those saddles give you an enormous amount of leeway in adjusting intonation, and the bridge feels totally bomb-proof.

The T-60 has a 3-way pickup selector, a pickup switch (which, of course, only changes the sound when both pickups are active), and separate volume and tone controls for each humbucker. The tone controls have an unusual feature -- when you bring them all the way up, they disable the humbucking wiring and the pickups get brighter (and slightly noisier), acting as single coils. This gives you an even wider range of tones. The T-60 can do a very good impression of a classic strat, and the neck pickup with the tone control rolled down gives a nice jazz tone. I've got mine set up with 10s, but you could use 11s or perhaps even 12s with no trouble, especially if you down-tune. 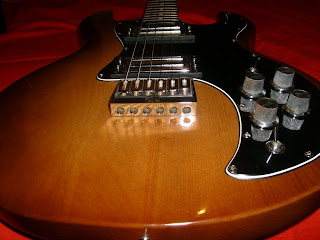 I don't generally like the "classic" sunburst finishes very much, but this one is a very restrained burst that is almost an iced tea color, and less reddish or orangish than many burst guitars. I'd call it "iced tea burst" instead of tobacco sunburst. In any case, it's a gorgeous spray job, and the finish over top of the dye is in fantastic condition.

The body wood of this guitar is Ash -- not the light swamp ash tonewood a lot of recent instruments are built from, but a dense and heavy northern ash with a lovely grain. 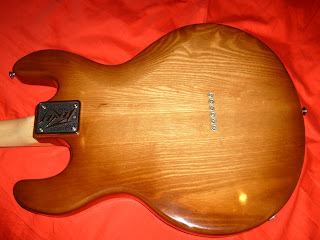 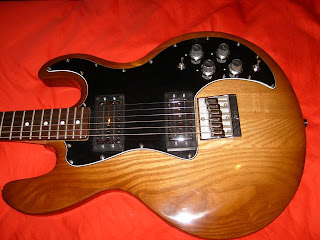 The neck is maple -- a very nice, fast neck, with wide jumbo "schoolbus" profile frets with almost no fret wear. It even has a little flame of its own that you can see in the picture. You might notice that the neck is glued together from two pieces. That's how they installed the truss rods. The T-60 had some (for the time) amazing advances in guitar manufacturing, including CNC machining of the bodies. Necks were carved with a machine originally designed to carve gunstocks.

The nut is aluminum, and perfectly cut. This one has a rosewood fretboard. Having played a T-60 with a plain maple neck -- literally, with frets driven directly into the wood with no separate fingerboard unlike some maple necks -- I believe the less common T-60s built with the rosewood freboard give the neck additional tuning stability. My maple-necked T-60 with the always feels to me like the neck is slightly too flimsy, and when you apply any pressure at all to it while playing you can hear the pitch shift. But perhaps they aren't all like that; mine may just need some work. The rosewood also seems to darken the tone up a bit, which is a matter of taste and the style of music you like to play.

The inlays are not very attractive on this instrument (they are "mother of toilet seat"), but you can't have everything. Another one of my T-60s has real mother-of-pearl on a rosewood fingerboard, and while much more battered, the inlays are prettier. 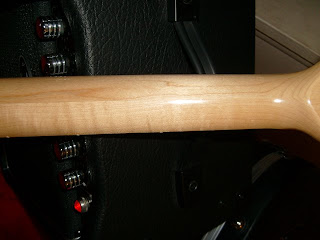 The tuners are among the finest I've used on any guitar -- very tight and stable. I left this guitar in a climate-controlled storage unit for six months, and when I pulled it out to play, it was still in almost perfect tune. The only instrument I've got that has even more tuning stability is my Parker Fly, and that guitar's neck isn't just wood, but has a shell of fiberglass and other exotic reinforcing materials. 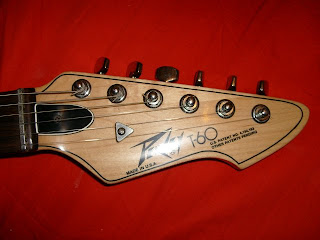 I really like the Peavey Limiteds, and some of the other Peavey designs, but for sheer quality of craftsmanship, playability, and durability, the T-60s are tanks. I like to say that T-60s are the guitars that, quite literally, could smash the competition.

While a bit heavy by modern standards -- back in the day players equated weight with tone and sustain -- these instruments still sound great and and very well-suited for blues, classic rock tones, or country. They won't give you that overloaded DiMarzio metal tone with octaves of squealing harmonics, and of course they are hardtails so if you love to dive-bomb, you'll be out of luck. But they are still very versatile, and it would take a lot to pry this instrument out of my hands! 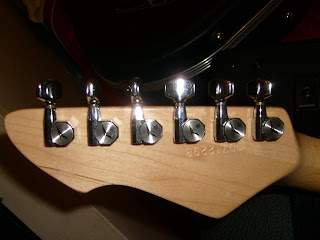 If you'd like to find one of your own, start looking now. Peavey made a lot of them, and there are quite a few on eBay every week. But collectors are starting to realize just how nice these instruments really are, so prices are going up, especially for the instruments in the nicer finishes (including the somewhat rare white) and those built with rosewood fingerboards.
Posted by Paul R. Potts at 6:47 PM

My Peavey T-60 is a 1983 closet find. Perfect like new and original case. Love it. Tobacco type sunburst and rosewood finger board. Pickups are too hot but I like it like that. Similar to Gibson Dirty Finger. I see the date of this post but could not resist. I am not an expert but I do know guitars well.These are a great find and getting harder to find.

Sadly, I have had to sell my T-60s along with most of my other guitars this past summer. It was a guitar that I loved and wanted to own since I was sixteen or so, when some of my high school friends had them. I was depressed because I was stuck with an outdated 1968 Fender Competition Mustang. It did not have the rock tone that I was looking for, which was very frustrating -- back then I knew nothing about different types of pickups. Now I wish I still had both that Mustang, and the T-60! Although as I've grown older, I've come to appreciate beefier neck profiles.