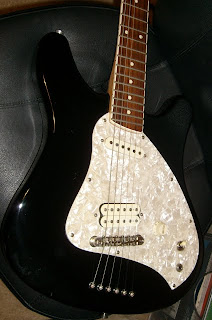 Here are a couple of recordings I made using the the black Squier Venus. If this experiment works you'll be able to hear what I consider so appealing about the tone of these guitars and why I just picked up two of them.

I ran the Venus running directly into my Peavey Mini Colossal 5-watt tube amp, with the power soak (output volume) turned all the way down so it doesn't drive the speaker at all (it's late, after all). I'm feeding my Apogee Ensemble with the XLR recording output of the Mini Colossal. It's going into Logic 9, into a virtual channel strip with a noise gate (the single coil pickup needs it), a pedalboard containing a compressor and chorus set relatively low, and then through a channel EQ and channel compressor. The whole track is then run through Ozone 4 using a 3-band tube saturation mastering preset, which isn't really doing that much except applying the multi-band compressor with the overall gain rolled down a bit.

The first tune I'm playing is Jonathan Coulton's "Chiron Beta Prime." I dig how this guitar's single coil pickup puts out quite a bit of throaty bass and mids. The volume control is rolled down to about five, and the three-way switch is set on the single coil neck pickup only. Your taste may vary, but I like the slightly laid-back tube crunch together with the chorus. I'm doing some palm muting and there are a lot of seventh chords that would sound very dissonant if the tube distortion was cranked up to heavy metal levels, but as it is they seem (to me) to just give a spray of harmonics that are bright but not shrill. But then, I'm probably going deaf, so your mileage may differ. 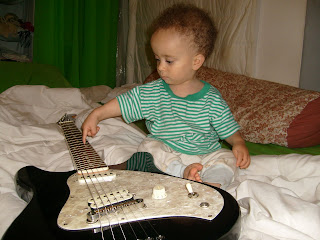 Just to do a little comparison and contrast, I also recorded "The Future Soon" using pretty-much identical settings but with the pickup selector switched over to the humbucker. I brought the guitar's volume knob down just a little bit more to keep the volumes at least approximately comparable. Note that the Venus has no tone control. The humbucker is loud and jangly. I prefer the sound of the single coil when recording a lightly distorted guitar part like this, but I think both of them actually sound pretty good. The humbucker is probably better suited to either a clean tone with EQ rolling off the highs, or heavier distortion to smooth it out a bit. Clearly more experimentation is needed!

If anyone cares, I played both using a Herco Flex 50 pick, which gives quite a bit of "snap."
Posted by Paul R. Potts at 9:36 PM