I've put together a new song: this one is a simple parody of Jonathan Coulton's "Re: Your Brains." This was a "one-afternoon wonder" since I wanted to finish the song in one afternoon while my wife and kids were out of the house. So: not a lot of retakes; get one that sounds reasonably good, even if it has a few little glitches, and move on, no second-guessing.

Currently it is only on YouTube. When I get a chance I will put it up on Bandcamp as well, possibly after re-recording some parts. It's a very silly little parody and a little sloppy, but overall I'm pretty happy with the way it came out. It is encouraging to realize that this is evidence that I'm getting gradually better at this sort of thing!

I'm mentioning it here because it features some interesting guitars. The main "jazzy" accompaniment part is a Peavey Firenza, a version equipped with P-90 pickups, and set up with 11s. 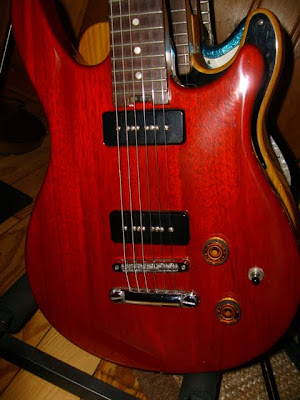 These guitars don't have fancy flame maple tops, but they sound great, aren't too heavy, the necks are really nicely playable, they are built like tanks -- and, most importantly, you can sometimes find them used for bargain prices. Most of my guitars like the Squier Super-Sonics work best with 10s, but this one seems to work best with 11s. Also, if you practice on 11s and get used to them, when you go back to playing a guitar with 10s, it will feel effortless.

For the solo, I'm playing the black Squier Venus. I've written about these guitars before. I think I recorded that solo line with the very bright-sounding bridge humbucker. It's going into some kind of Auto-Wah Logic guitar rig. The tone reminds me a little bit of Jerry Garcia's live sound with the Grateful Dead, circa a couple of concerts I saw around 1990.

Both of these guitars were recorded going directly into the Edirol FA-66, which is an inexpensive FireWire interface that I got used on, you guessed it, eBay. They go for a pretty low price used. The plan had been to use it for live streaming. My expectations for the preamp quality weren't very high, but it actually sounds pretty good, even recording vocals, and I've been using it both for singing and spoken voice. It isn't perfect: it's hard to set levels on knobs that aren't calibrated to anything; the phono plug inputs clip really easily; sometimes when it has sat for a while the audio stream is garbled, and I have to mess with the sample rate to get it to work right again. But in general, it works pretty flawlessly, and I think this would make anyone a fine starter audio interface for a basic home studio.

I bought the Edirol box intending to make it part of a more portable rig, and it is velcroed down next to a Mac Mini on a shelf in a 6U rack case. 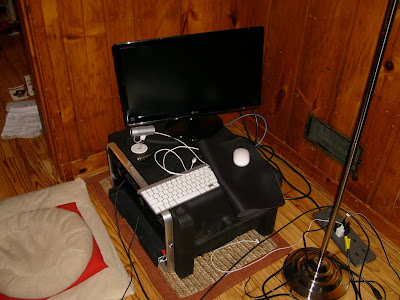 It's very awkward to get cables in and out; I have to use a flashlight. It really could use a patch bay. And it is currently on the floor, which is murder on my spine. But this rack setup has one other great advantage for recording vocals, and that is that the Mac Mini is extremely quiet. I don't feel the need to ever run my vocal tracks through Izotope RX to take out background fan noise.

I'm just guessing here, since I haven't used one, but I suspect that it probably even sounds, quality-wise, somewhere in the ballpark as the Digi002 rig that Jonathan Coulton uses. That setup has been good enough for him to record some amazing tracks. He does work extensively with an outboard channel strip, the dbx 376, and his Pod Pro and Behringer rack unit for guitar and bass. I've considered more outboard hardware, especially an outboard channel strip for vocals, but I'm not so big on the idea of rack hardware for guitar tracking. I don't think I'd ever be willing to give up Logic's amazing range of tools for guitar and bass for the simplicity of outboard hardware. I especially like the ability to change the effects setting after recording the track (the channel strip settings are not "printed" on the track, which is recorded on the hard drive entirely dry). I did put some money into the Radial JDV, but that is by way of trying to get cleaner and clearer pictures of the original instrument than the Hi-Z setting on either of these boxes can give me alone, not to color the sound.

In fact, the Edirol box sounds good enough that it is making me wonder whether I should just sell off the Apogee Ensemble and just work only with the Edirol box. But it does seem to be a help to have a second, more powerful rig for mixing and editing, especially when I want to do something CPU-intensive like noise reduction or bouncing tracks, and the Mac Mini just can't compete with the Mac Pro with 8 cores and several extra built-in hard drives.

Finally, there is a third guitar part: I recorded a bass line using my Steinberger Synapse 5-string fretless. 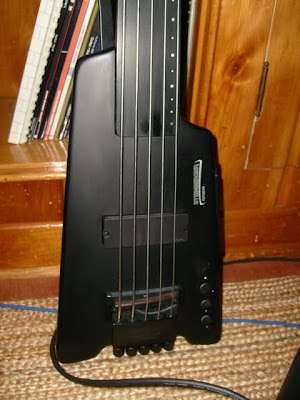 This bass is fun to play but it is a little problematic. I have some difficulty getting good tone out of it when I record it. It is driving my Radial JDV direct box, and from there running into the Ensemble. I was getting hardly any signal out of it, for some reason, despite trying the special impedance setting for piezo pickups. I had to add a lot of digital gain even after considerable gain on the Ensemble's input, and it came out sounding strange. Is the battery dead? It shouldn't be; I changed it only a few months ago -- to a Lithium 9-volt -- it should only be "on" when plugged in, and I rarely use it.

Add to this the fact that you can't get strings that fit the bridge properly and this is another gear I'm thinking of getting rid of. It looks damned cool but as far as being able to drop a track effortlessly into a mix, it is a far cry from the XP bass or XQ basses, even the Nashville one that my son plays. (With those basses I have the opposite problem -- they put out a lot of voltage!) But neither of those are fretless. If I had the money available I'd try to find a 5-string Pedulla fretless. I watch them go by on eBay, and they are gorgeous, but quite expensive. I'd also consider a Godin.

There's another piece of new gear; I tracked this song with a pair of Audio-Technica ATH-M50 headphones that I picked up on the Labor Day sale at Guitar Center, along with the aforementioned Reflexion filter. These are great headphones, and work better for tracking than the Sony MDR-V700 or Pioneer HDJ-1000 cans I've been using -- more natural-sounding bass, and better isolation. Again, recommended. In retrospect I should have spent the money on these earlier. I still do prefer the DJ headphones for general music listening, especially if I'm listening to the built-in amp on my laptop, where the EQ can use a little emphasis, and actual DJing.

If it isn't obvious yet, we've moved, and into a house that provides us with much more space than our cramped apartment in Ann Arbor. I have a separate studio room now, as well as an office. However, there are lots of logistical challenges left. The rooms don't have any acoustic treatment yet, and they are all wood.

I added a Reflexion filter to my mic for recording vocals, and that helps some: 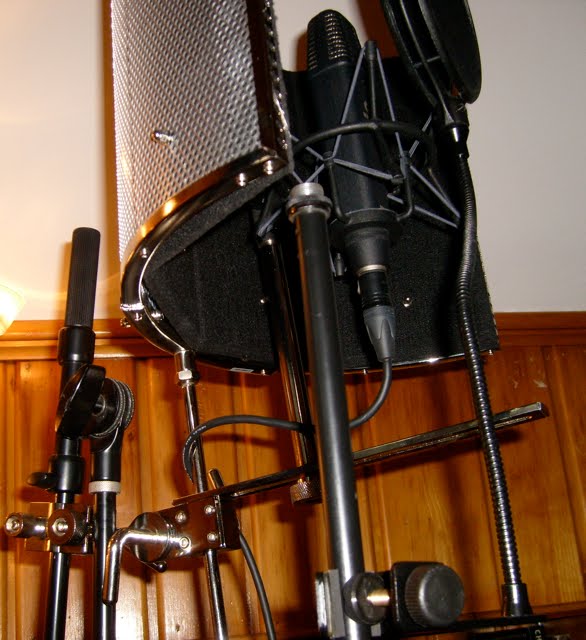 The Reflexion is basically a curved wall of audio-absorbing material behind your mic. It comes with a very elaborate rig of clamps and blocks to secure it to a microphone stand along with a mic. It's quite fiddly and takes forever to set up, and it's kind of cantilevered, with a center of gravity that's hard to center on your mic stand -- that's why it is clamped to the extension arm and not the stand itself. And although I have a pretty heavy-duty tripod stand (and I wouldn't recommend trying to set it up on one of those round-based mic stands), and it probably won't come crashing down, doing some major damage on the way, I keep having the feeling that it might. I think a separate, purpose-designed tripod-style mic stand for it would have been a better idea. Also, as it is, I don't have any place left to clamp my pop filter, so that's on yet another mic stand in front. And if I want to read a lyric sheet or a story or something with the whole rig in place, that's a little problematic. So, my feelings on this thing are a little mixed. It does definitely dry up my vocals, though, and that's a big help.

And finally, I have no furniture to speak of in here yet, besides a couple of garage-sale chairs. The general plan had been to have desks custom-built by one of two carpenter friends of the family, but various moving-related projects, like replacing the damaged flooring in the family room, went so far over budget that there isn't really any extra money available for that in the short term. So, for now, the gear is set up kind of unceremoniously on the floor. I'll probably be cobbling something together out of sawhorses and scrap wood but the odd shape of these attic spaces really needs something custom, and I'm not a carpenter. Right now everything is awkwardly placed and very hard on my spine and hips to work with. In related news: I am getting old. But I'm trying not to let that serve as an excuse not to keep playing and recording.

So what's the future of the Potts House studio? Well, after I get myself set up with something resembling desks where I can actually sit to work, and get the gear off the floor, I want to address the acoustics of the room. I don't really want to go whole hog here, but a few panels on the walls, and maybe a few diffusers on the curved ceiling, would probably give me noticeable improvement.

As far as gear, there isn't that much I'm still burning for. I'd like to consider an outboard mic preamp, like a Grace Design unit. I could use that with either audio interface. I've got my eye on USA-made Ovation mandolins. I want to have some of my guitars fixed up and fine-tune the collection, getting rid of some and adding some. I haven't quite figured out the best way to do that yet. I'm always interested in trying out some different microphones, although for now I think I'm interested in sticking with relatively cheap Oktava models, particularly if I can get them modded. I'm contemplating putting a little more effort into a decent pedalboard and PA for live playing.

Does anyone know any carpenters in the mid-Michigan area who would be willing to trade their labor for a guitar or two?
Posted by Paul R. Potts at 8:26 AM No comments: