I had a request on YouTube for a wiring diagram for the Squier Super-Sonic. It just so happened that I had one I had made myself a while back lying on the floor of my extremely cluttered office, and had been stepping over it for weeks, each time thinking, "you know, I should scan that in case someone might find it useful, and then I can recycle the original." So here is a good excuse to finally get that done! 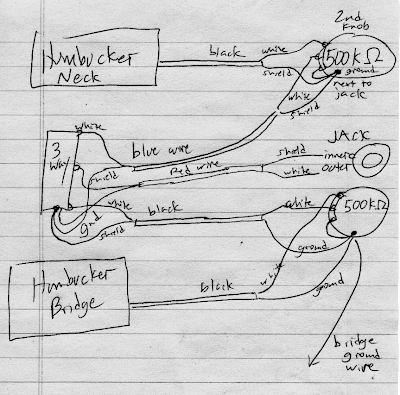 Anyway, there it is. Click for a larger version. I hope this is clear enough. The Super-Sonic is a bit odd: it has two humbuckers, a 3-way switch (neck, bridge, or both pickups), and two volume controls, but no tone controls. The volume knobs are in the positions opposite to the ones you might expect: the one closer to the bridge pickup controls the neck pickup, and vice-versa. If you don't like this, it ought to be a pretty simple matter to open up the control cavity and swap the two pots on the control plate (and that should be an easily reversible change if someone wants to put them back to the original "backwards" arrangement).

Anyway, the basic wiring idea is that the jack and the pots each have one two-conductor wire running to the toggle switch. At the toggle switch, all the shields go to the ground point and the other conductors go to the 3 other switch points. The jack has the shield ground attached to the inner (sleeve) conductor. The volume pots are wired like volume pots typically are wired, with a short bit of wire grounding the pot's 3rd connection point to a ground point on the pot shell itself, and the wires from the humbuckers and switch both connected to the first two connection points with their shields connected to that same ground point on the pot shell itself. It's not very complicated as guitar wiring scheme goes; I wouldn't want to have to diagram a Parker Fly with piezo and coil tap! Don't forget to connect the ground wire from the bridge to the first pot (the one that isn't next to the output jack). Don't worry, if you get a ground point wrong it will buzz terribly to let you know.

Both pots are both 500KΩ. The original humbuckers both use two-conductor cables, although I think if you wanted to substitute one wired with 5 conductors there is a way to tie the conductors together; if I recall correctly, replacement pickups from (for example) Seymour Duncan come with instructions on how to do this.

There are basically 5 wires in my Super-Sonics. Fortunately the body cavities are not super-small like on a Mustang, so there is a little room to work, and there is enough slack in the wires to wiggle things around. All 5 of these wires run through the hole between the control cavity and the pocket for the neck humbucker, so make sure they are threaded through there before you solder both ends. These guitars are not very well shielded and if you are doing one, you might consider shielding the cavity, although this tends to be more noticeable with single-coil pickups than with humbuckers. The original components aren't the best. The 3-way switch is a Korean part and an identical replacement is available from Allparts:

Note that many common toggle switches that would fit a Les Paul are too big to install without drilling. A short version of the Switchcraft 3-way might fit. If you replace the pots, which would probably improve the sound as the originals are pretty cheap, keep in mind that to fit the holes in the control plate you will need a mini pot. I don't have an exact part to recommend but I think if you look for "500K mini pot" on Allparts you should find some options.

I'd like to replace the pots and switches but I've been putting off this project because I know my soldering skills aren't great. The last time I did this to a guitar, I screwed it up so badly that I had to get professional help anyway and ruined some switches. I might try again -- if I do, I'll take pictures and let you know how it goes!
Posted by Paul R. Potts at 10:27 PM 3 comments: