The Squier Venus is an interesting design. Like the Super-Sonic (see Guitar Pron 5: The Squier Super-Sonic), this one was made by Fender Japan in the 1997-1998 time frame. As one of the "Vista" series instruments, it is built considerably better than the "Squier" name might seem to imply. Also, although the Jagmaster gets more respect, these Venus guitars are better-built (although the workmanship is not what I'd call fantastic, only good; there are almost always minor fit-and-finish issues on these instruments that remind me that they didn't get a lot of attention in the build process). 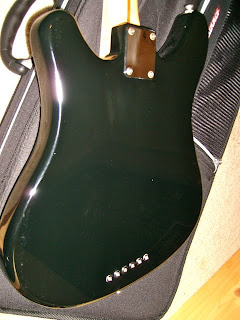 It has an extremely flat body, and it is made of (I think) basswood, making it very light. The body has wide "hips," and a very, well, curvaceous pickguard design. It's definitely a feminine take on classic electric guitar design. The lighter body makes it kinder on someone a little smaller. This instrument may be made for a woman, but with that jangly tone it is also strong enough for a man! The scale length is 25.5 inches, the same as a Stratocaster. I wonder why Courtney Love didn't design a short-scale like the Jag-Stang?

Note also that it is a hardtail, which is unusual in a Fender or Squier instrument that isn't a telecaster. And not only that, but it has a tune-o-matic bridge and string ferrules running through the body. And yes, that neck is bound! 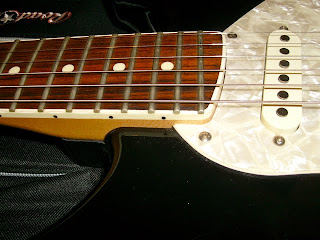 These instruments came with gig bags, not hard-shell cases, and so they are usually pretty dinged up. It's a bit tricky to find a case that fits this wider body design, although some generic cases will fit. With the very flat body, you may want to put some kind of extra pad inside so that it is not hanging by the neck (storing it this way long-term might tend to cause the neck to warp). 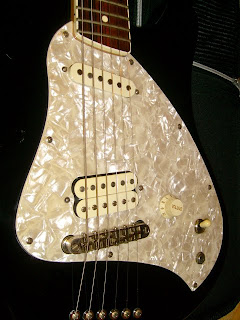 I recently came across someone selling two of them locally, and not through eBay, so decided to make an offer on both. Both of them are in good condition but needed a little work. The black one needed a good cleaning and setup, and the neck was misaligned a bit. That was easy to fix, though. It's now set up with 10s and the action is raised a bit, and it plays wonderfully. There's no tone control -- it's got very basic electronics, just a humbucker, a single-coil, and a 3-way switch. Courtney Love was allegedly fond of just the Seymour Duncan Little '59, which is interesting because that's one of the pickups I chose for my heavily modified Jag-Stang -- another project I need to complete someday. 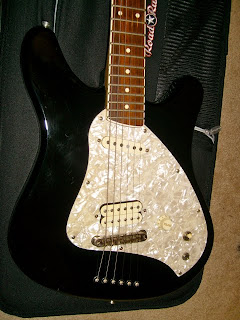 I apologize for the quality of these photos -- it's hard to get a good view of a black instrument. I did not get a chance to set them up against a photogenic background like I did with the Super-Sonics. I'll try to get some better shots of these after I finish up the rest of the minor repairs. 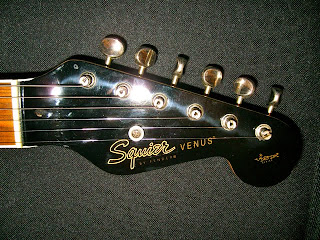 There is also a sunburst model that is in even better condition, but for some reason is missing some screws and springs on the pickups. I also have to re-solder some wires, but that is not too difficult. I don't have a photo of the sunburst one put together yet. I'm sorry the color is so bad in these photos -- this classic burst paint job is actually very nicely done and not garish at all. I'll try to get some shots in natural daylight after I get it put back together and set up. 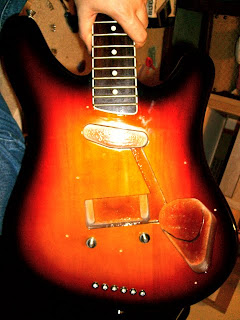 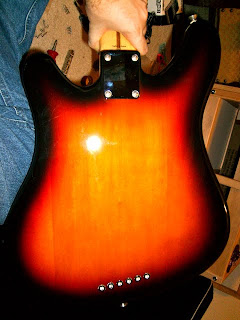 There is another color commonly seen, and that is sea-foam green. I'll give that one a miss, thanks. It may be a classic surf color, but it's just too ugly for me. There is also a relatively rare Venus 12-string that I'd like to try -- I've never played a 12-string electric. I'm also still looking for another Vista-series Jagmaster, preferably one with the truss rod adjustment at the headstock.
Posted by Paul R. Potts at 10:49 PM

They're interesting guitars, these Veni. I quite want one myself, though I'm surprised they're not short-scale too. I designed a guitar fror my self once and found that this is VERY similar to what I came up with. I think Kurt would have been happier with this (if shortscale) than his Jagstang ended up too, as the Venus has the same pickup range but has a hardtail and TOM bridge. Nice blog, BTW.

Thanks, Jay. My guitar collecting has kind of gone on hiatus recently while I've focused on some songwriting contests but I expect to get back to more posts on guitars in the near future.

So, this is totally random and apparently about 2 years after the fact, but I wanted to note that because of the size of the body on a Venus (and how close the bridge is to the "tail" of the guitar), it feels and plays very much like a shortscale -- the same way a Fender Jaguar feels full-scale because of the size of its body.

I love my Venus, I bought it with plans to customize it, but after playing it and gigging with it, it's kind of perfect as it is. The neck single-coil is surprisingly good and Strat-like, too.

Thanks Anonymous. I like them to. I keep thinking I'd like to do some minor upgrades, but I think they would be limited to better tuners (there are some Gotoh replacements that look the same and don't require drilling any new holes), and maybe improving the shielding. The single coil does sound pretty great.

I originally had two, black and toilet-seat green. I eventually sold the black one, which I had to rewire with heavily shielding because of the brutal overhead lighting system at the bar I was performing at regularly. Even so, the humbucker held its own admirably. I'm glad I kept the green one; the value seems to have doubled over the years. And I love playing it, although I do get some weird looks on occasion. Still looking for a case.

Thanks for your comment Dave. Yeah, it would be nice if they had put just a little work into them, for example even shielding the body cavity with conductive paint. It doesn't seem like that would have been so expensive. But all those lower-end models have aggressive cost-cutting going on.